This page is intended to give some help to those like myself who are interested in tuning the AH 3000 engine for road use. The information is based on my own research and findings, and neither myself nor the Austin Healey Club UK can take any responsibility for the accuracy of the information, or any consequences of it’s use.

The use of three HD8 2″ carbs is well documented, all three having the same needles (UH) and dashpot springs as the standard setup. However, I have not been able to locate any data for triple 1.75″ carbs. In my case, the attraction of this setup was that I already had the two standard HD6 carbs and a set of standard MKII inlet manifolds. These manifolds can be opened out from 1.5 to 1.75″ diameter but no further. Fitting triple 2″ HD8s requires larger, after-market, manifolds.

The following charts my experiments with different carburetor settings, first on an engine fitted with a BJ8 profile cam, then on my second engine with a Denis Welch DWR8 cam; details of which are given below. Both engines have a branch exhaust manifold fitted whilst the second engine also has an alluminium head and Omega forged pistons.

* Using a straightened paper clip through the breather hole in the top of the dashpot top and a bit of masking tape to stop it sliding under it’s own weight, a full throttle blast indicated that the piston was reaching it’s full travel with this spring.

The following chart below gives a comparison of the annulus area for each needle, i.e. the area between the needle and the jet, at each stage of the needle travel. The measurements are equalised at position 2 which is about the idle position. For needle data go to this Triumph site by Teglerizer Engineering 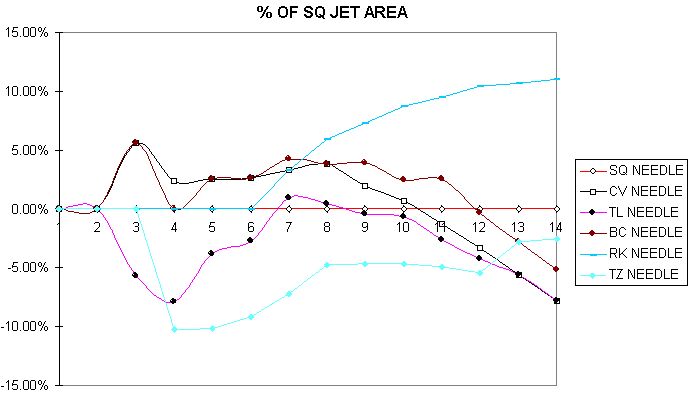